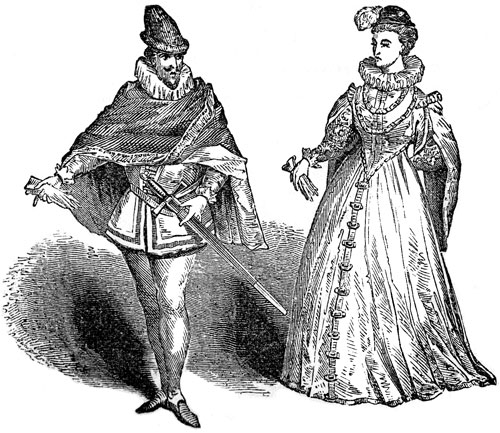 Renaissance costume (dress or clothing), according to costume historians, is a style of clothing that began to take place around 1490's throughout the world
Contents [hide]

This was the period of clothing that could be said that excessiveness in all areas of costume began. Different countries took the news styles differently. For instance, the northern European countries were distorting the natural figure by padding sleeves, doublets and stockings. Italy did not go as far as the North, and England and France followed Italy's lead while they stuck to more medieval influenced styles. Germans went to the greatest extremes making “improvements” on the natural silhouette. They put large puffs at the head, shoulders, thighs; small puffs, like boils, over chest, back, arms, legs and feet. They put feathers on many on everything from wide-brimmed hats to the knees. Clothing at this time followed suit with all other types of creative expression at this time—it went over the top into new discoveries.

Influence of the Tudors

As usual in the world of fashion, people with an abundance of influence, control, and power tend to set the current trends and styles. This has always been true since the dawn of time. The only difference that back in the Olden Days the monarchs set these trends, while now it is usually celebrities.

Although numerous monarchs influenced Renaissance fashion, the Tudor monarchs of England had perhaps the most important impact on Western European fashions of the 16th century. And out of these monarchs, the most influential were Henry VIII and Elizabeth I.

Henry the VIII was, during the younger part of his life, active and reportedly handsome, extremely vain, and a symbol for all things manly. The Venetian ambassador described him in 1515 (when Henry would have been 24) as this: "His majesty is the handsomest potentate I ever set eyes on; above the usual height, with an extremely fine calf to his leg, his complexion very fair and bright, with auburn hair combed straight and short,...his through being rather long and thick." He also had a wide girth and large proportions that he enjoyed accenting with doublets stuffed at the shoulders, duckbill shoes, and codpieces. He was also never lacking in an abundance of fur and jewels to showcase his wealth. He reportedly spent 16,000 ducats on clothing annually, which would be about $3,140,000 today. He was also described as being "the best-dressed sovereign in the world: his robes were the richest and most superb that could be imagined: and he put on new clothes every Holiday."

Subsequently, his styles became fashionable throughout the Western European empires. Methods, such as slashing & puffing and stuffing sleeves & shoulders, that enlarged the figure became wildly popular during his reign and remained even after his death. Even women’s clothing exhibited more fur and larger sleeves.

His six wives also made some considerable contributions. Katherine of Aragon from Spain introduced the Spanish farthingale to England. Anne Boleyn made French fashions of crescent caps/French hoods and tight, square-necked bodices popular in royal courts (although not French herself, she spent a few years there serving as maid of honor to Queen Claude and lady-in-waiting to Archduchess Marguerite). Anne of Cleves introduced Flemish styles the English court, including leg-of-mutton sleeves.

King Edward VI, Henry VIII’s only son and heir, continued in the fashions of his father. However, he used those styles to attempt to hide is small, slight figure rather than to accentuate his manly features as his father did. All though the rule of Lady Jane Grey lasted only nine days, she did manage to bring more high-necked, Spanish-style surcoat gowns into style. Queen Mary was not particularly popular, so did not have much influence on fashions of the time, although she was reported as wearing very ostentatious, bejeweled clothing.

And now we come to Elizabeth I. She was very fond of clothing, so much so that when she died she had over 3,000 gowns and headpieces in her wardrobe. Although she was never considered a great beauty, her style was widely admired and mimicked. She was a tiny woman–small-breasted with a small waist. Consequently, fashions accented a silhouette of a long, flat, narrow torso. Even men wore corsets to try to make their bodies fit this mode. Her pale complexion and high forehead caused women to wear even more white powder/paste on their faces than before and pluck their foreheads and eyebrows (Elizabeth actually died from lead poisoning from the lead that was in the white makeup she used to cover her smallpox scars). She also loved elaborate clothing just as much, if not more, than her father. Her outfits were always lavished with jewels, embroidery, ribbons, and lace. Her particular favorites were pearls, representing her image as the "Virgin Queen." The below painting is her "Rainbow Portrait" and depicts the color and embellishments always decorating her gowns and headdresses.

This next portrait is her "Armada Portrait", painted shortly after the defeat of the Spanish Armada. It portrays the styles she made fashionable, including the ruff, wasp waist, and leg-of-mutton sleeves, as well as her love of pearls.

Most men's hair was bobbed but the length of your hair was chosen by individual taste. They could be straight or curled according to the nature of the wearer. As the sixteenth century advanced men wore their hair shorter almost like modern hair. The men wore variations of the low-crowned, brimmed cap and was often turned up all around or with just one side turned up.

Women wore the low-crowned hat in the same fashion as the men. Women either wore their hair with elaborate structures in their hair like the Germans or with just a kerchief. They had the hair covered with some kind of headdress. Some names of headdresses are: crescent, kennel, gable, transparent half-dome bonnet, or the gorget and wimple. Peasant women wore the cote of the earlier period and handkerchiefs or collars around their neck. They looked like what we associate dress of the Puritans

Colors of this period are strong, often dark colors. Black velvet was a staple fabric of the period, especially in headdresses. White linen was another accent against colors of gold and burgundy for collars and wrist ruffles. 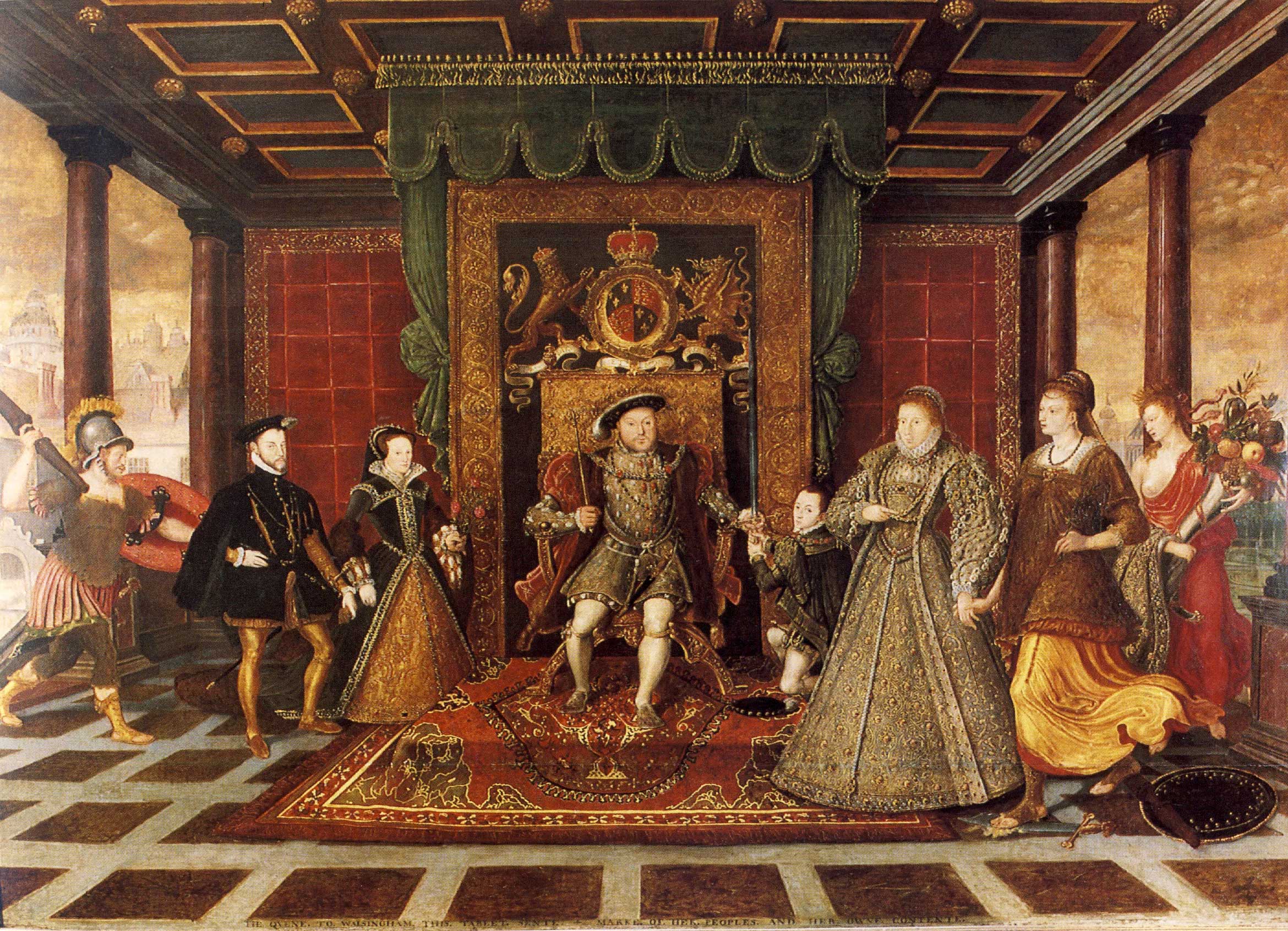 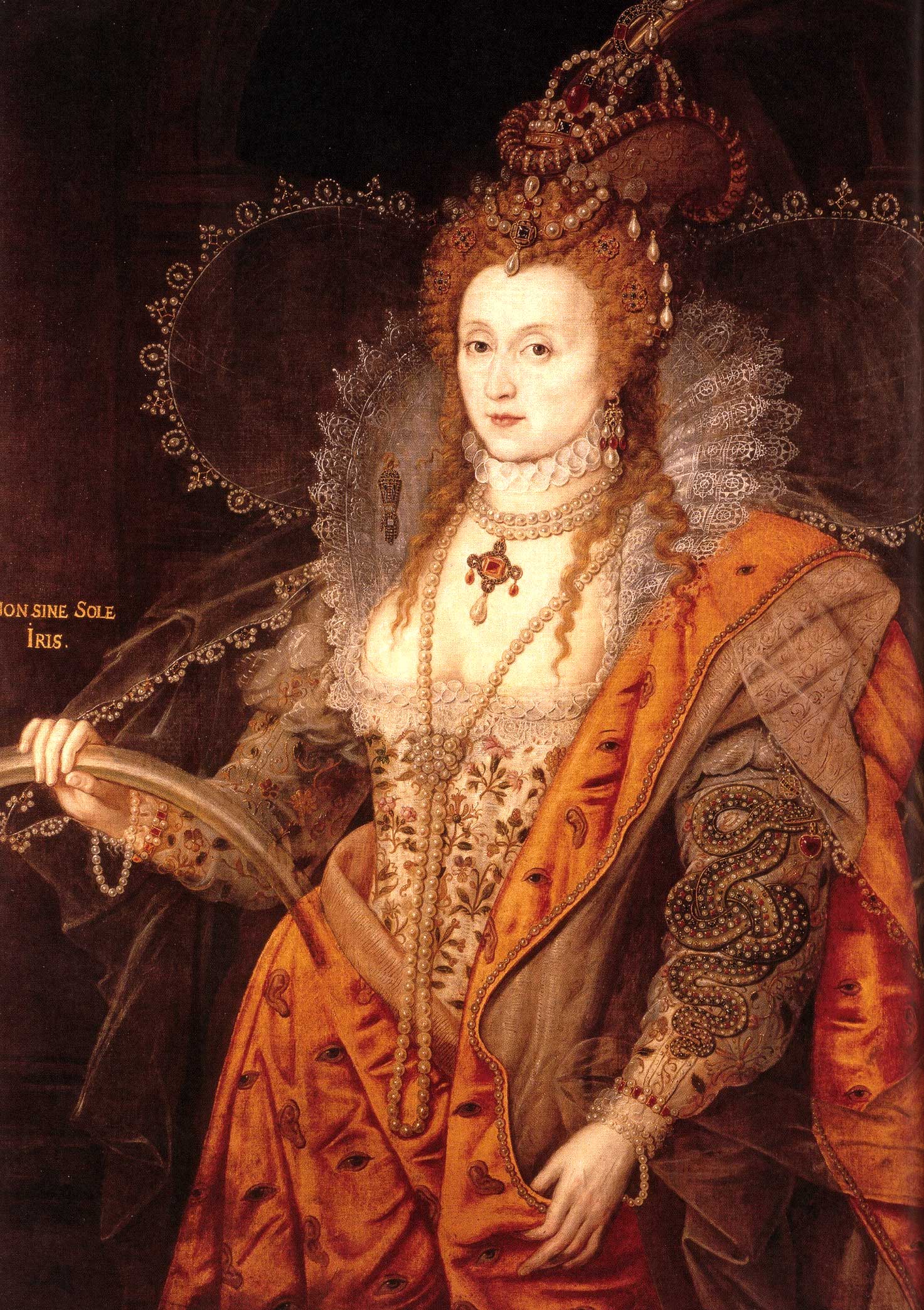 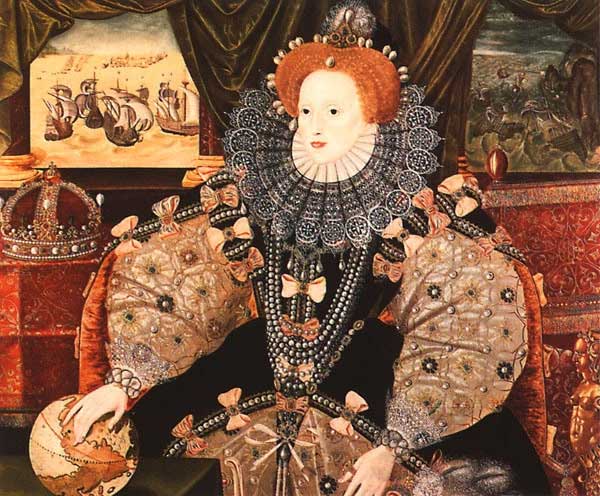 You can also search for Renaissance Costumes to check for alternative titles or spellings.